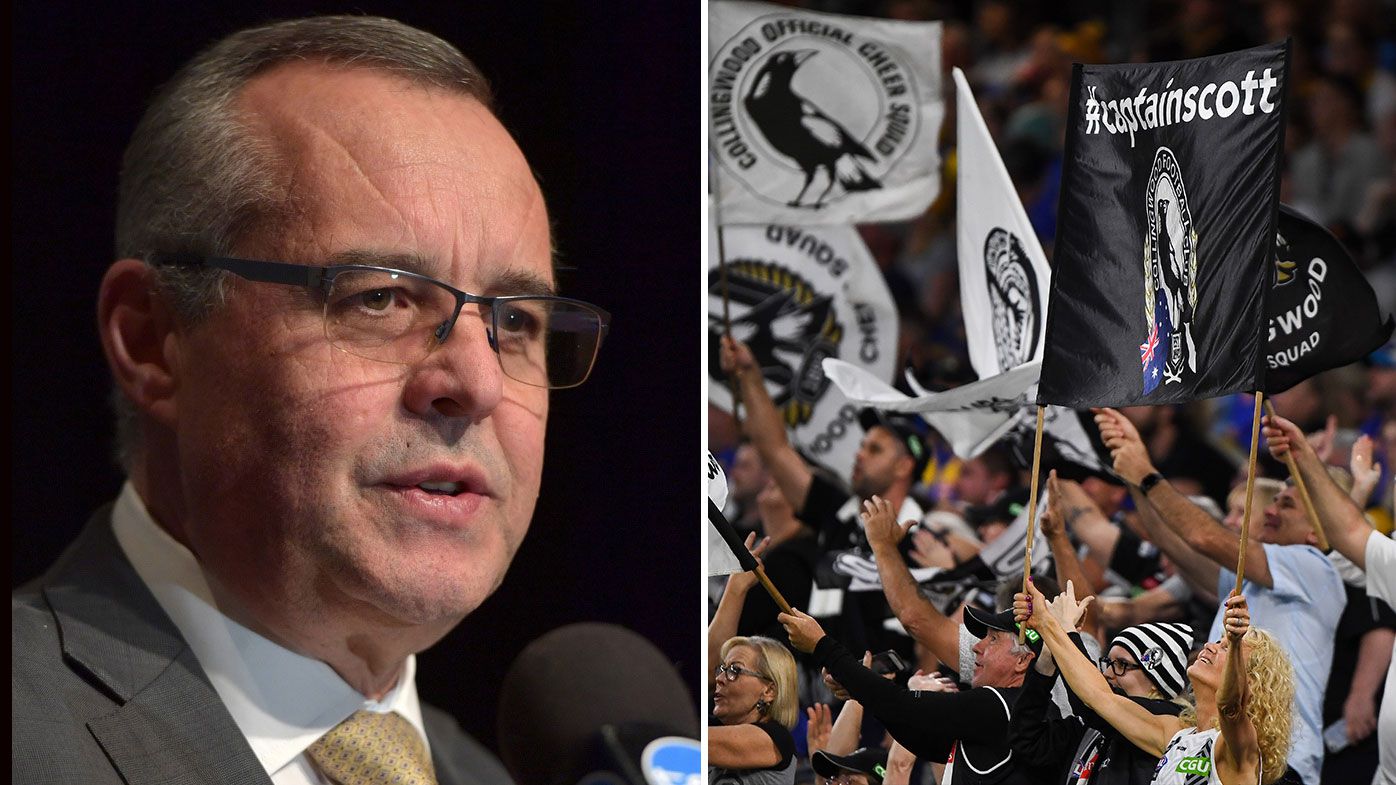 Collingwood’s boardroom politics continues to get messier after former Nine executive Jeff Browne officially announced he will challenge Mark Korda to be president of the Magpies.

Eddie McGuire stepped down from his position after 22 years at the reins amid the damning Do Better report. Bringing further scrutiny to the club has been the team’s lacklustre performance on the field and mystery over coach Nathan Buckley’s future.

Korda was endorsed to take up the role after McGuire’s exit but he’s been under-fire in recent weeks with very public criticism from key figures at the club dominating headlines.

Two weeks ago Korda was hosing down explosive reports of Browne orchestrating a coup to overthrow his leadership and denied that the AFL is backing Browne. Korda also insisted he intends to remain Collingwood president until at least the next board election.

But in a statement released last night Browne made his intentions known, claiming he was “approached by many passionate Collingwood supporters and members” about the club’s “current circumstances and future”.

“Many highly talented and loyal Collingwood people have expressed a desire to contribute by joining a new, refreshed board,” Browne said in the statement.

“Our position on the ladder and publicity about leadership and the board is disheartening and destabilising. Collingwood is a great club and strong and united leadership is critical if we are to move beyond our current malaise.

“I know and respect a number of the current directors, however, my recent experience is that there is a growing wave of support from members for change and this change must begin with a refresh at board level.

“I recently met with Mark Korda and told him that if an opportunity arose for the appointment of new directors, I would offer myself for a position on the board. That offer was not taken up. While Mark, and other directors have served the club with sincere intentions, I think the time has come for change.

“At this time there is no immediate process in play to change the board.”

Collingwood’s annual general meeting was due to be held in February and Korda had planned to keep his role until then. But the EGM may cause a shake-up despite his warning that “coups were not in the best interest of the club”.

“It is possible for members to petition for an Extraordinary General Meeting (EGM) to spill the board and elect new directors. If that is the will of the members, I would support that call in the absence of an outcome that saw board renewal by virtue of a mutually agreed process,” Browne said.

“While I am cautious about causing any further disruption to an already disappointing year, if the members want change via an EGM, then I would expect a number of high-quality candidates who have contacted me, to offer themselves up, and seek to join me in a new, revitalised, passionate and skilled board.

“In an effort to achieve change in the least disruptive manner, I intend to speak again with Mark Korda, to seek an immediate four vacancies on the board.

“I am prepared to negotiate in good faith, which three members of the current board of directors are most suitable to contribute to a reconstituted board and some continuity of operational knowledge is desirable. The four new positions would include myself and three other high quality candidates chosen specifically to provide the best overall mix and blend of skills and diversity. I would seek the endorsement of the new board to become the chairman and president.

“I urge the current board, in the best interests of our club, to listen to the overwhelming desire of the members and supporters and to enter negotiations for change, beginning with a refreshed board.

“If appointed president, I would seek to have all directors including myself, offer themselves up for re-election by the members at the next Annual General Meeting.

“I believe this way forward is the best and most orderly means of addressing the concerns of the Magpie community, and agreement to the course I have proposed, would in itself, begin the vitally important task of restoring confidence in the leadership, governance and performance of our club.”