Rugby league Immortal Mal Meninga has lauded South Sydney ace Latrell Mitchell ahead of the Rabbitohs’ Indigenous Round clash and backed the star fullback for a colossal game against the Parramatta Eels in his beloved round.

This Stadium Australia match is Mitchell’s final chance to convince NSW Blues coach Brad Fittler that he deserves to make a State of Origin comeback for the series-opener on June 9.

It’s also a chance for Mitchell to lead the Rabbitohs back to the winners’ list after they were thrashed 56-12 at the hands of the undefeated Panthers last week.

The former Rooster drew the praise of Meninga for his tremendous work in the Indigenous space.

“It takes a lot of courage to do what he’s doing for one so young, to come out and call out racism and stereotyping of Indigenous people, First Nations people. He actually wants to do it, which is fantastic, he actually wants to be a role model, he wants to stand up for his culture.

“But he also has a great understanding of what it means to be an Australian, so he’ll play with a tremendous amount of pride. Not only because he’s a competitive beast and the way they played last week; he’ll just want to come out and perform. It just happens that it’s Indigenous Round so you’ll see the best of Latrell today.” 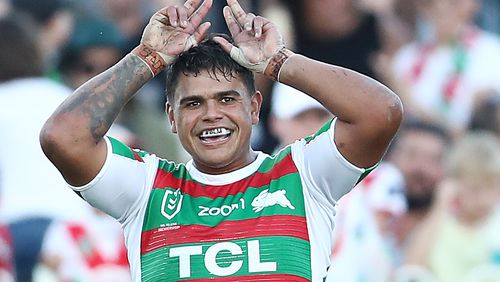