There is no more pussyfooting around for Reds coach Brad Thorn, who has ushered seven Wallabies squad members into his starting lineup to tackle the Crusaders at Suncorp Stadium.

Thorn heavily rotated his side for the 40-19 loss to the Highlanders last weekend on the back of a six day turnaround from the Super Rugby AU final.

But predictably it’s all hands on deck for the clash with the Aotearoa champions as Hunter Paisami (facial fracture) and Harry Wilson (concussion) return along with Taniela Tupou, Lukhan Salakaia-Loto, Fraser McReight, Suliasi Vunivalu and Tate McDermott. 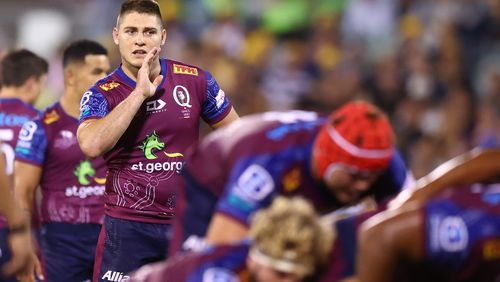 “They were this year’s Aotearoa champions and we know it’ll be a tough encounter on Saturday night,” Thorn said.

“There’s no better test than playing against the best. We’re excited for another big crowd at Suncorp Stadium. It was great to see all our fans at the grand final.”

Meanwhile, the Crusaders have lost All Blacks duo George Bridge and Scott Barrett for the clash.

Bridge will miss the rest of the trans-Tasman season with appendicitis while skipper Barrett remains sidelined with illness.

Will Jordan replaces Bridge at fullback while prop Oliver Jager replaces Michael Alaalatoa, flanker Whetukamokamo Douglas comes in for Tom Sanders, halfback Mitchell Drummond gets the nod ahead of Bryn Hall and winger Sevu Reece is unleashed for Manasa Mataele.